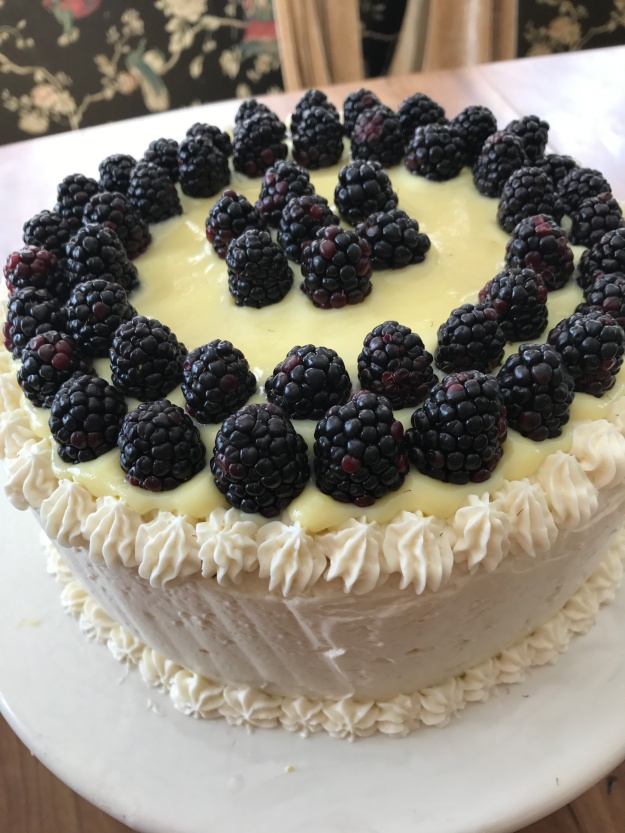 So in the midst of a blizzard my daughter and I started watching season 2 of the Great British Baking Show… it’s the purest form of guilty pleasure TV. It’s reality TV but with a very mannered bristish sweetness that I can’t get enough of, and it always makes me want to bake, always. The last episode I watched was “pies” and the custard pies made me hungry and wanting for custard (my daughter attempted this meringue situation after the an episode). This morning at the market I saw organic blackberries that didn’t require a second mortgage and so I figured I could get out my custard jones with some combo of blackberry and lemon… So this cake was born. It seems like a lot of steps, and it is but I rocked it out in one podcast of This American Life and half a WTF… so under 2 hours from start to all the dishes done and cake in the fridge (and lots of bowl licking).

It’s probably about time to take your cakes out..cool them on racks

This is where I decide to rock out some Lemon Curd, because that’s pretty good too and more lemon never hurt anyone. It’s basically the same process as the custard.

See now you have a million things done, it looks like a war zone in your kitchen, you wonder why you started this process when you could be on the couch playing on your phone but you’ve come this far… soldier through.